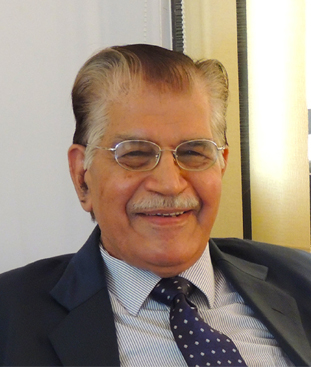 Prof. B.K. Sthapak received his B.E.(Hons) Mech. Degree in 1959 from Jabalpur University and obtained Masters and Ph.D.degree from University of Roorkee in 1964 and 1975 respectively.

He has more than 75 publications to his credit in various international and national technical journals and proceedings & has guided and examined a number of Ph. Ds. He has worked as Principal of Government and Non - Government Engineering Colleges and was the Head of State Project Implementation Unit of World Bank Assisted Technician Education Programme in the State of Madhya Pradesh. Dr. Sthapak has been a member of Board of Governors of several Technical Educational Institutions including Indian Institute of Technology, Mumbai, M.A.C.T. Bhopal, Shri G.S.I.T.S. Indore, M.I.T.S. Gwalior and S.A.T.I. Vidisha. He has been the Dean of faculty of Engineering and member of the Executive Council at Ravi Shankar University, Raipur and Vikram University Ujjain. He is the recipient of Khosla Research Award 1975, Best Teacher Award 1982 of Indian Society of Technical Education, Engineer of the year 2002 Award of Institution of Engineers India and Life Time Achievement Award of Chhattisgarh Council of Science and Technology 2003. He has been the Director of Technical Education in the erstwhile State of Madhya Pradesh and the Founder Vice Chancellor of Chhattisgarh Swami Vivekananda Technical University, Bhilai, before joining the Jindal Steel and Power Limited at Raigarh in the capacity of the Principal Director of O.P.Jindal Institute of Technology and Jindal Institute of Power Technology in April 2010.